Northbound traffic flows along Chicago Street on Tuesday in Joliet. 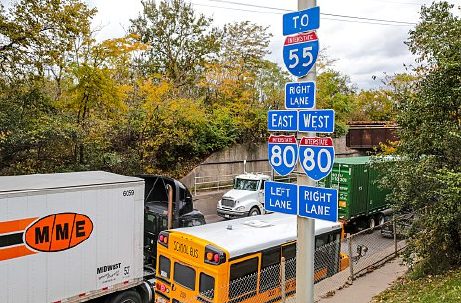 Photos by Eric Ginnard – eginnard@shawmedia.com
A sign marking the route to Interstate 55 and Interstate 80 can be seen along Route 52 on Tuesday in Joliet.
PREVIOUS IMAGE

The state highway improvement plan for the next five years has something big in store for every part of Will County.

The Interstate 80 project that has captured the most attention promises improved bridges, new interchanges and other improvements through Joliet to the western end of the county.

Along Interstate 55, a new interchange at Airport Road and an improved interchange at Route 126 promises to make commuting easier for motorists from Plainfield, Romeoville and Bolingbrook heading north to Chicago.

Going south on I-55, a new interchange at Route 59 provides the infrastructure Joliet officials say is needed to spur development of Rock Run Crossings, and more improvements farther south will accommodate growth of Elion Logistics Park 55 in Wilmington.

Even the east end of the county may be getting a significant interchange, said John Greuling, chief executive officer of the Will County Center for Economic Development.

An Interstate 57 interchange planned for Eagle Lake Road is at a proposed access point for the long-contemplated South Suburban Airport.

“There’s no planned commercial or industrial development at that point,” Greuling said of the proposed interchange. “You have to think that the purpose of this is to support the airport project.”

Greuling and other Will County leaders for years have called on the state to spend more money on infrastructure to accommodate population and industrial growth.

The five-year highway improvement plan released this week has projects estimated statewide at $23.5 billion, more than twice what was originally projected because of the injection of money from Rebuild Illinois, the capital program supported by increases in gas taxes and license registration fees.

“Past five-year plans have identified engineering design and construction cost,” Greuling said. “The problem was there was no money to fund construction.”

State Rep. Larry Walsh Jr., D-Elwood, said this plan includes about $1.5 billion for his district, which includes the Joliet section of I-80 and a southern stretch of Route 53 from Joliet to Wilmington scheduled for intersection improvements.

Construction on most of the big projects in Will County is estimated to begin in the next five years.

“I thought the plan was very good for Will County as a whole,” Romeoville Mayor John Noak said.

Romeoville, Plainfield and Bolingbrook have been planning for a new I-55 interchange at Airport Road and improved Route 126 interchange for 25 years, Noak said.

“Not only for Romeoville, but for most of northern Will County, it creates significant increase in access,”

Noak said of the interchange projects.

In Joliet, Mayor Bob O’Dekirk was happy to see an improved I-55 interchange at Route 59 in the plan.

The reconstructed interchange is designed to provide access to the northeast quadrant of Interstates 55 and 80, where Cullinan Properties plans the 265-acre Rock Run Crossings development that would include stores, restaurants, entertainment, offices and homes.

“This is the piece everyone’s been waiting for,” O’Dekirk said. “With the commitment from the state, this should kick [Rock Run Crossings] into high gear.”

■ Interstate 80 improvements from New Lenox to Minooka include new bridges over the Des Plaines River in Joliet, new interchanges at Chicago and Center streets, and other improvements estimated at $1.2 billion.

■ I-55 interchange reconstruction at Route 129 and at Lorenzo Road in Wilmington, includes auxiliary lanes and road widening along a 2.5-mile stretch estimated at $148.7 million.

■ I-55 interchange reconstruction and auxiliary lanes between I-80 and Route 52 (Jefferson Street) creates access to future Rock Run Crossings project estimated at $78.8 million.